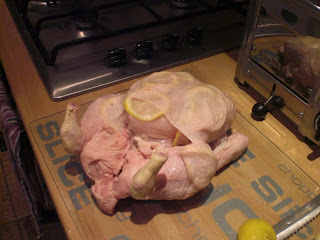 Lemon chicken is an easy recipe for the oven as well as the BBQ. But there is something that really makes it sing when you get that smoky bbq flavour cutting through the sweet zestiness of the lemon.


Preparation is quite easy, 2 lemons cut finely and the lemon slices then placed carefully under the skin. As you can see, I managed to split the skin in my eagerness... try and avoid this. 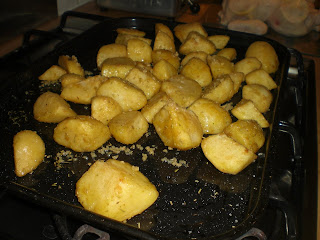 I then pre-roasted potatoes under the grill for 10 mins to give them some colour and to make sure they didnt turn into sludge whilst in the Weber. They were then tossed in garlic, rosemary, sea salt and olive oil. 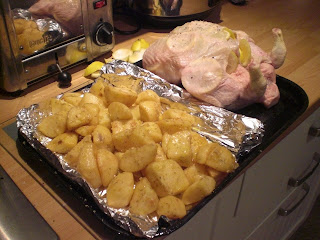 Right... ready to rumble... This then went into the weber BBQ Grill using indirect heat. (about 20 coals on each side). The potatoes were dropped in the under the chicken, between the coals in the classic Weber fashion. The chicken fat drips down into the potatoes and they fry up beautifully. However, word of warning, cheap chickens tend to be injected with water to beef up the weight. As a result, it drips down into the potatoes and you end up with boiled tatties... not really pleasant... you have been warned! So, bung it in the weber, after about 60 mins you should have a beautiful crispy chicken. For an extra treat, throw some hickory chips onto the coals for that bbq/smoky flavour. 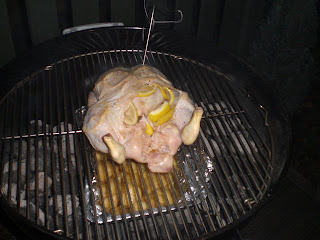 And the result, well speak for itself. I consider this a dead easy recipe, minimum preparation time and even the novice bbq'er can pull this off looking like a BBQ hero. 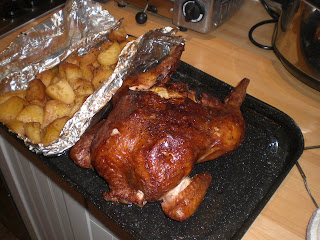 Our Bird Resting after a 60 minute sprint 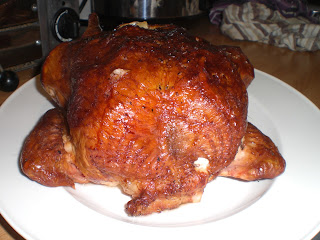 A face that any mother could love 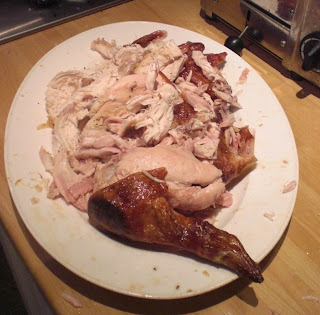 Supposedly carved, but it looks like someone let a bomb off inside my bird
Verdict: The potatoes were crispy and brimming with flavour. The chicken was delightfully crispy on the outside and the lemon flavour was subtle but pleasant. There were no leftovers... so yes.... MORE
BBQ by Cuan Brown at 10:28