BBQ Date: Mid April
BBQ Weather: OMG - Summer arrived without warning !
With the recent improvements in the weather, and the added bonus of the Icelandic Volcano "Crisis" clearing the Surrey skies of air traffic, I thought it was high time I dusted off my crumbling Brinkmanns & officially welcomed in the smoking season. Whilst jabbing at some home made burgers on friday night, I thought I'd get my ECB's serviced ready for the morning. Initial inspections were not good - rust holes in the water pan, thick layer of congealed crud on the grills, and what appeared to be volcanic rocks welded into the fire pans. But I'm a pragmatic sort of bloke & thought I'd be able to get a few more runs out of them before I gave them the Viking funeral they so richly deserved. Located a new supplier of smoking wood & fell asleep dreaming of smokey meats...
Awoke in a splendid mood saturday morning, to the sounds of a gently burbling baby daughter, and made my way to Cobham to speak with the chaps at The Barbecue Shop (http://www.thebbqshop.co.uk/) and collect my smoking wood. Arrived shortly before they opened shop, and had my face pressed up against the window, drooling, when they unlocked the doors. I was greeted by a lovely chap, who reminded me of everyone's favourite grandad, Stan Lee. Whilst "Stan" set up the magnificent display of Weber kettles, and a huge variety of impressive gas BBQs outside the shop, I wandered round & gazed enviously at the array of kit on display. Saw a 57cm Weber Smokey Mountain for the first time, and was somewhat awestruck at just how monstrous it is - honestly, photos do not do it any justice, it is properly enormous. And they had an equally envy-inspiring selection of heavy duty offset smokers in the store, which made my wallet start to twitch. Once I'd selected a couple of bags of wood, I found myself drawn towards a smallish smoker set up in the corner, merely to "enquire" about it, initially. After a few minutes of drooling, I made the decision to say "what the heck" and promptly added it to my shopping list. The kit in question was Grillpro's entry level Vertical Smoker, priced at a very competetive £129. It looked very similar to my colleagues ProQ Excel, at least in design, which was a good enough endorsement for me. Returned home, full of excitement, and set about constructing my new toy. Assembley took roughly an hour, the instructions were clear and it all fitted together very nicely. 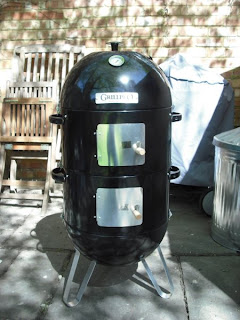 I suspect, though have yet to confirm, that the construction and materials are inferior to the ProQ, and that there are a few other minor differences, but the multi-tier configuration, air vent, and access door layout were very similar. Unlike my old Brikmanns, the smoking chambers are powder coated steel on BOTH inside and out, which should increase the lifespan and reduce the chances of rust appearing. Addditionally, the smoker's integrated thermometer is very helpfully calibrated in Farenheit & Centigrade, which is a vast improvement on the old ECBs (Cold/Cook/Hot) scale. In summary, it is clearly a much more sophisticated design than the entry-level Brinkmanns, but is perhaps not as ruggedly built as the offering from ProQ.
Sadly, I had completely neglected to prepare any meats for the initial run, so I nipped over to Waitrose, and picked up a few bits - some simple ribs, pork sausages, and a pack of 20 wings. The ribs were covered in a simple Kansas BBQ rub I found here http://bbq.about.com/od/rubrecipes/r/bl91211a.htm and popped in the fridge for a couple of hours, and I decided I'd do the wings & sausages raw to see how much smoke flavour would be imparted over a relatively short smoke. On reflection, I should have done half flavoured, half raw, for a more realistic comparison, but that will have to wait for the next run. 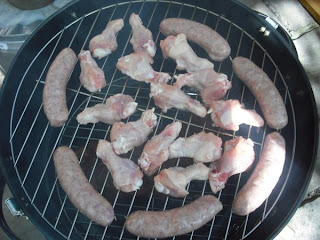 I used the highly dependable minion method (http://www.virtualweberbullet.com/fireup2.html) to get the smoker kicked off, and used a few chunks of mesquite to provide some smoke. The fire basket is a decent size, if not huge, but was clearly capable of taking a full 10Kg bag of briquettes. I kept a keen eye on the temperature guage, and with all the vents open, the temp climbed pretty rapidly to around 270F, and seemed to stay between there and 250F for the rest of the smoking. Was very relieved that the temperatures were at the appropriate levels, as I've heard plenty of nightmares about not being able to get the best smoking temp from a smoker. 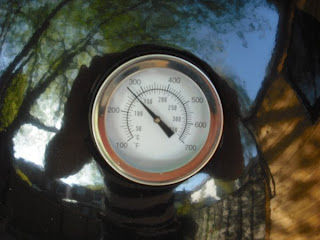 The meats were loaded in, and the time recorded at around 3:30pm. I opened the obligatory beer, and set about doing a bit of determined shed organising, whilst the Grillpro chugged away. At the 2 hour mark, I noticed the temperature start to climb, and checked the water pan, which was emptying rapidly. A refill brought the temperature back to around 260F, and a few more chunks were added to the fire. It was SUCH a pleasure to have such easy access to the fire pit and water tray after all those years of labouring with the Brinkmann's barely accessible trays.
By 6pm the meats had taken a wonderful colour, so the sausages and wings were removed & set aside in a warm place. The ribs were given another half an hour, to ensure they were fully cooked. The meats were served with a simple pasta salad, some of my mother in law's glorious potato salad (potatoes, mayo, chunks of blue cheese, bacon and spring onions), and some, inevitably untouched, salad leaves. My wife, who has in previous years been steadfastly unimpressed with my efforts on the smoker, recanted her opinion, and even commented on how much she liked the ribs - a real breakthrough! 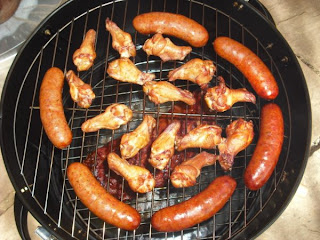 A fantastic opener to the season, a real celebration of the sunshine, and holds great promise for my next planned smoking - an overnight Pork Shoulder smoke.
BBQ by PunchKickSkateDrink at 01:25