After missing out on Ben's Bacon Explosion last weekend, I was determined to give it a go. However, I wanted a truly South African twist on the experience. A famous sausage from the Rainbow Nation is called Boerewors (pronounced 'bu-revors'), which is a mixture of Pork, Beef and at least 30% fat, loaded with spices such a coriander, pepper, nutmeg, cloves and garlic. Its truly a delight bbq'd and placed on a bun. Needless to say, I substituted pork sausage meat, with Boerewors sausage meat from my local provider 'The Savana' shop. 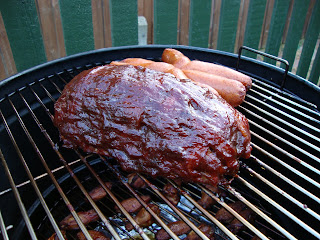 I followed the now famous Bacon Explosion recipe, but with a few of my own twists. The ingredients are as follows:

2xPack of Boerewors (I only used 1&1/2 sausages meat)
30xPeices streaky bacon
Memphis Magic Dust
BBQ Sauce of Choice - I used Mississippi Sweet Apple in the abscense of my own.


Step 1 - Make the Bacon Weave
This is where I thought I would have the most problem, but was actually straight forward. This takes about 20+ peices of bacon. There is a good video here. I then lightly dusted the weave with the magic dust. The end result looked like this: 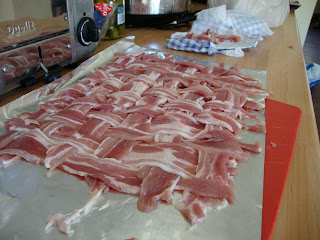 Step 2 - Place meat over Weave
I squeezed the boerewors out the sausages and then carefully pressed it out over the top of the bacon weave. It looked like this: 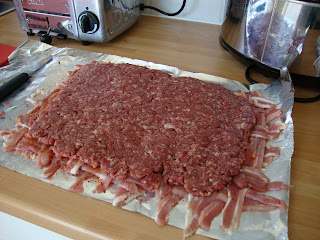 Step 3 - Fry remaining Bacon
I then had about 10 peices of bacon that I fried off till it was really crispy. Once they were cool, I broke them into little peices and sprinkled over the top of the boerewors meat. I topped this with the Mississippi Sweet Apple Sauce and were were now good to go. Make sure you leave about 1" of space around the edge of the meat so that you can seal the meat once its rolled. 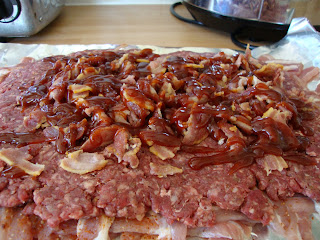 Step 4 - Wrap
Now, carefully roll ONLY the meat, leaving the weave laid out. As you roll the meat pinch the ends to seal off the sausage. Once the meat is rolled grab the weave and carefully place the weave over the top of the rolled sausage. Tuck the weave under the sausage to its tightly packed. I then covered with a dusting of the Magic dust and we were good to go: 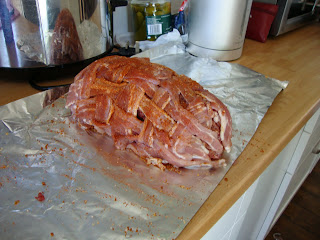 Step 6 - Finishing touches
After smoking it for 4 hours, I took the Mississippi BBQ sauce and basted it liberally over Boerewors Bacon Explosion and then placed it back in the smoker for another 20 minutes until the BBQ sauace had glazed nicely over the top. And this was the end result: 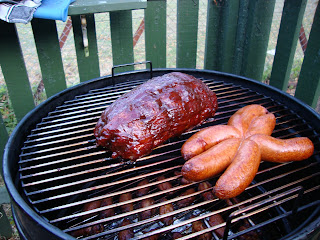 We then sliced the roll and placed it on white buns and smothered in a bit more BBQ Sauce... It was FANTASTIC. The mix of beef and pork with the high fat content meant the meat was terrificly juicy. Clearly not a weight watchers meal and high in fat. But heck, who cares. It was to die for. Definately be revisited again, potentially with cheese and jalapeno stuffing next time for an adult version! 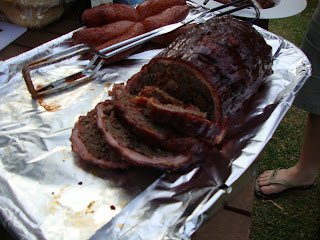