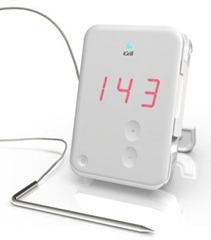 BBQers are obsessed with temperatures.  When we were in Kansas City, there was surprisingly little talk of sauce or rub recipes, it was all about what gear you had and how you knew it was at the correct temperature.
The iDevices iGrill is yet another device that panders to our desire to continuously monitor temperatures without lift the lid/opening the oven door.  It’s a dual probe thermometer and alarm with a bluetooth link to your iPod touch/iPhone/iPad.  A free app runs on these devices and shows a display with one or two temperatures monitored.  Its a pretty nice looking app (screenshots from my iPad); 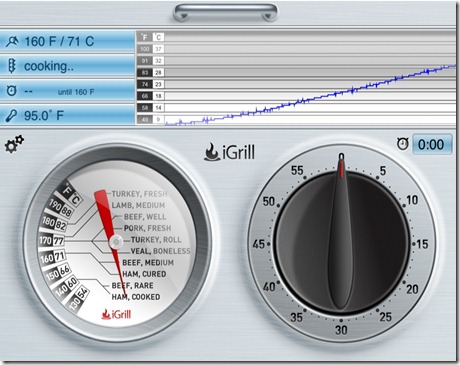 The timer on the right gives you a countdown and a visual indicator.  When the timer fires, you hear a puny ringing sound… so you won’t be using the timer.  The temperature gauge on the left shows one or two temperatures using the dial.  There’s no option to change the visualisation or look and feel here so you’re stuck with what’s on the screen. 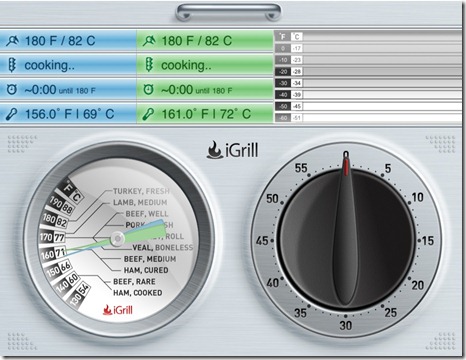 Things look slightly different with the (optional) second probe attached.  Two sets of needles on the dial, two sets of temps and a shrunken graph.
On the remote unit itself you can see both sets of temperatures (one after the other) when you push the button, and you can set an alarm to go off on the remote itself.  The alarm is a little louder on here than the iPad but clearly useless for BBQing.  The unit is decently made but not weather sealed at all, and not intended for outside use.
The system itself works very well for the use its intended for – cooking meat in an oven.  The range on bluetooth is very decent (as usual for bluetooth), and the temperatures update fine.  That’s all it does and it does it ok.  I’ve used it a couple of times cooking roasts and will continue to do so.  I’ve heard that the bluetooth drops out sometimes with the iPhone but haven’t seen it on the iPad ever.
The iGrill software itself is a bit of a wasted opportunity.  Its a bit poorly thought through in terms of the alarm and the timer.  The software resets if you run another program (so if you look at your email, or a recipe out of the in-app browser) – you then lose the graph history (resets the graph) which is practically the coolest bit, although the target temp remains.  If you want to see that graph over time you literally have to use your iPad, etc. for nothing else.  Its definitely a wasted opportunity for BBQers.  We could have the following functionality with a tiny bit of development;
I’m sure someone could write an app to address these – I’ve asked iDevices for some info on the API or how to code against their bluetooth data but they’re not sharing.  Oh well.

Verdict: Fun and decent enough for indoor roasting.  Stick to the Mavericks for BBQing until someone sorts the software out.  Cuan's review of that is here.
BBQ by Ben Cops at 13:01

Email ThisBlogThis!Share to TwitterShare to FacebookShare to Pinterest
Labels: Gear