These went down really well with the 10:20am frozen bourbon shots at the last BBQ competition so as promised here is the recipe! 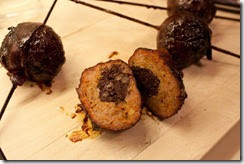 Ingredients  - makes 4 so multiply it up for more:
In my humble experience, making smoked sausage and bacon things requires good sausage and good bacon so I use a good sausage and the best streaky bacon I can buy, but this particular recipe is actually relatively tolerant of using cheap ingredients.  The point of this dish is the soft, creamy black pudding in amongst the firm, salty, smoky sausage. Also, this is ideally a breakfast delicacy and so is probably best put on just before you go to bed at a competition or smoked ahead of time and heated up later (either in an oven, microwave or indirect on a kettle).  It keeps very well, probably benefits in fact, frozen and vac packed.  Defrost before reheating.
Method
Remove the sausage from the skin and add the rub 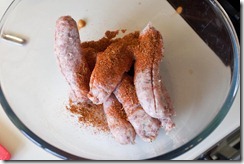 Mix thoroughly with a wooden spoon 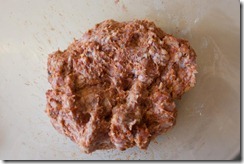 Cut the black pudding into quarters, and each quarter in half 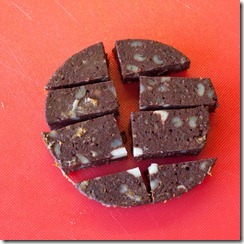 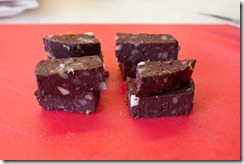 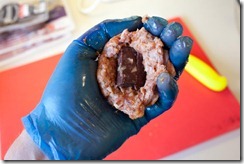 Cover the ball with another piece of sausage mixture and press together with your hands, patting to form a tight ball.  Ensure that no black pudding peeks through the sausage.  Try to get the pudding right in the centre of the ball - I've done these far too much to one side because I was trying to use up some leftover sausage. 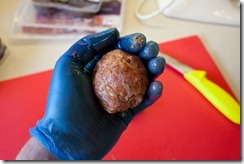 Repeat for all remaining black pudding lumps and sausage 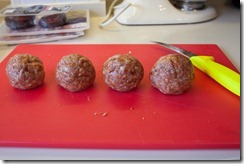 Wrap each ball in a strip of streaky bacon and secure with a skewer.  A wooden skewer is fine or a metal skewer will do too, main thing is to keep the bacon strip on the ball while smoking.  Probably add a dusting of rub at this stage too if you're feeling like it. 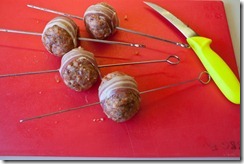 Place on the smoker at 250F and smoke for one hour. 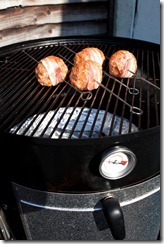 After one hour, turn each ball to smoke evenly. 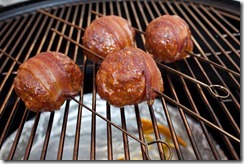 After 3-4 hours total, paint with the BBQ sauce and smoke for another 20-30 minutes.  Then remove and rest. 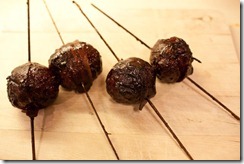 Remove the skewers – slice and serve 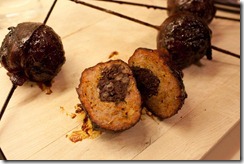 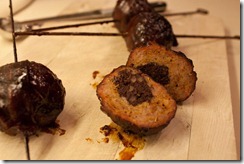