Round 1
PnB got off to a flyer with some crispy, smoky tomato covered chicken wings. Delicately spiced, fall off the bone chicken and smothered in sticky sauce. A 2 portion double tap, leaving SnW a bit rattled. 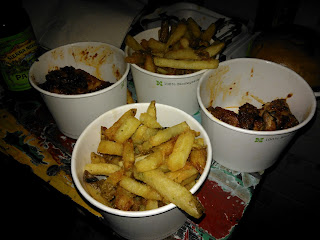 But SnW was not about to be dominated in the first round by the cheeky upstart boxing above its weight, it was a battle of quantity vs quality. SnW waded into the fray, sporting a right hook of parmesan dressed fries, a deft body blow of pickles that were so large they could be used to prop up Southwark bridge and a haymaker platter of Mac n' Cheese that could feed a family of 4 with left overs. The Mac n Cheese was the unexpected suprise of the SnW meal, garlicky, cheesy, creamy, and finished with bread crumbs and roasted in the oven. Simply disgustingly, Simply Awesome! 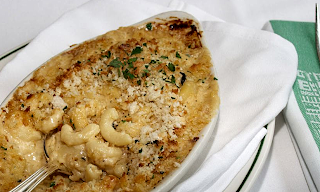 SnW fries were crispy and light, a nice change from the average heavy american style fries. PnB was not to be outdone on the fries department, demanding attention with an aggressive counter of crispy triple cooked fries, flavoured with rosemary and salt. Stunning!

Both competitors were well warmed up and the punches were flowing, one got the sense this would be the definitive round. SnW came straight out of the blocks swinging with an 10oz, ground chuck and fillet offcuts classic 80's style burger. A light bun that clearly was not designed for the onslaught delt by the heavy hitting patty, light on the garnish (1 slice of cheese, 1 slice of romain lettuce and a slice of tomato), heavy on flavour. It was hard to refuse the dominating appearance of this burger, starring you down into submission. A simple grilled heavyweight burger, swinging for all its worth. 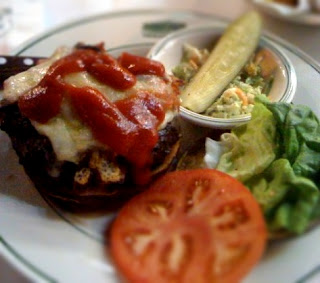 PnB, staggering after the heavy beef onslaught, showed a delicate touch, dancing around the danger zone. Providing an incredibly juicy patty, with a good proportion of chuck (BurgerMe feels its possibly short rib, our pallets had been blitzed by the wings/fries so we couldnt really tell) to fat ratio, cooked medium rare, followed up by a sizzling array of punchs, creamy cheese, smokey mayo and pink pickled onion. All held together by a choice brioche style bun that you would want to take away for a dirty weekend.Bam Bam Bam, subtle, juicy, definative, hitting with a heavy fist and landing blows faster than the heavyweight, it was over... PnB looked down over SnW sprawled on the canvas... the burger show has clearly moved on to a new younger generation. Easily one of the best burgers we have ever tasted on any continent, packing flavour with every mouthful, just the right balance of earthy meat flavours which are well offset by the burger garnishes. 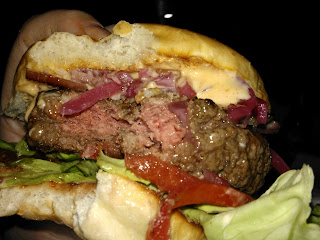 Verdit
SnW sporting a $15 price tag for fries and a side of Mac n Cheese is a tough ask to beat on price alone. PnB manned up with a respectable £7 burger and £2.50 fries. On paper, SnW should have finished it off in the first round, a track reckord a mile long, good breeding, it was punching harder, on volume, price and quality of ingredients. But as with all standoff's, its the whole package and desire that counts, PnW simply put together a burger that is hard to defend against. Juicy, creamy, crispy, packed with flavour and oh so moresome!

Patty n Bun by KO - Clearly a shock upset, we cannot wait to get our hands on more of these beauties!
BBQ by Cuan Brown at 14:38