The most relaxed, organised competition so far, and finally a place in pork! 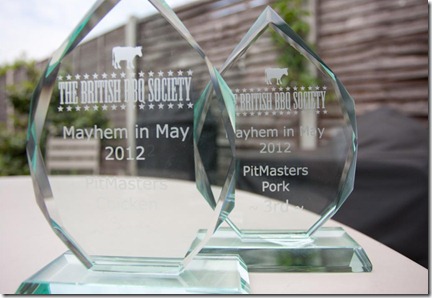 After two weeks of ferocious rain, the sun finally came out for a baking hot weekend (May 26/27 2012) and the first competition of the UK BBQ season.

As usual team BBQ Fanatics were the last to arrive at IBQN HQ in Tongham; rolling up late and leaving first just enhances our rock-star status at competitions, so we’re careful to leave it to the very last minute to arrive (although not as late as Rudgewick in 2010 when we showed up at 7pm on Saturday night – that was a bit hectic).

We’re set up a bit more professionally now, with a Cambro meat locker for keeping things hot or cold in convenient shelves, and almost enough cookers.  We were neighbours with Miss Piggy’s who took Grand Champion, which made for good spying (“shigging”). 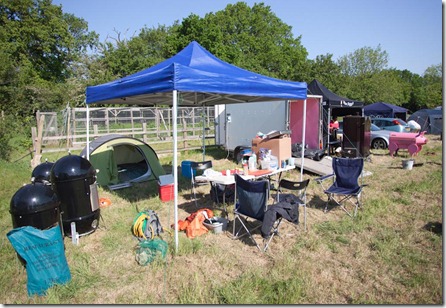 We even managed to eat a proper dinner courtesy of my newly acquired 1985 snap-on tools branded Weber Go-anywhere portable BBQ. 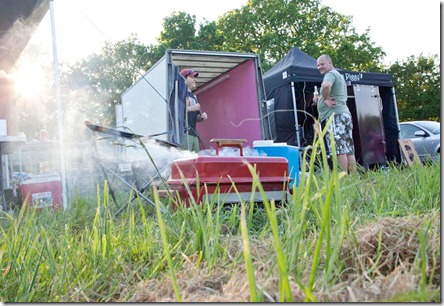 It had never had a fire lit with the lid on before and I don’t think it had been cooked in for some time.  The bright red colour darkened slightly in the hot spots, it looks even cooler now.  A great addition to the family. 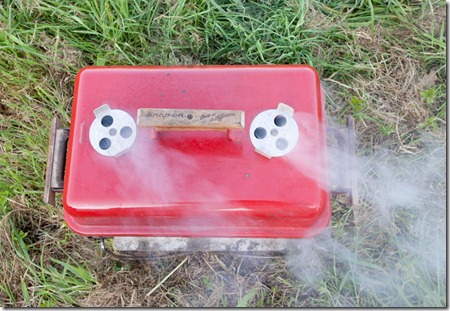 My large WSM had its first outing with Nomex gaskets on the doors and lid, which worked very well indeed.  Zero leakage where it wasn’t wanted and full control with the vents.  Temperature swing was only 15 degrees for the 12 hours the pork cooked for and great temperature recovery after opening the lid.  Hopefully that’s not just a fluke.  I got these from http://www.bbqgaskets.com/ – the WSM kit with 1/2 inch Nomex for the lid and 1 inch for the door, with Rutland high temperature cement. 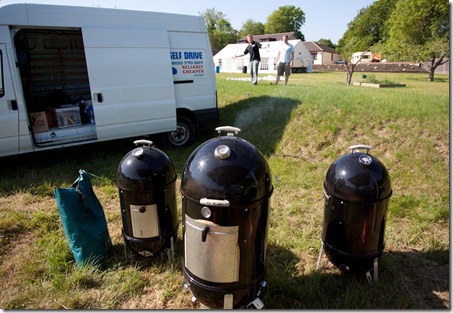 Here’s the obligatory shot of someone (Cuan) injecting some meat (brisket) with a vet needle.  He loves it. 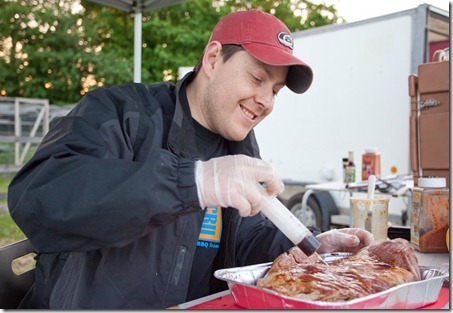 It was a great weekend.  The weather was terrific and with the new rules (you can trim meat offsite, but not season, inject or brine it), the new equipment (particularly the Cambro) and the combination of eating dinner properly the night before and getting some sleep, we had probably our most relaxed competition ever.  Our scoring was good too, with some very strong scores across the board and finally a placing in pork!  We also have good plans for making those scores better – there were lots of lessons learnt from the weekend.  But all in all a great opening to the season.

Email ThisBlogThis!Share to TwitterShare to FacebookShare to Pinterest
Labels: Competitions